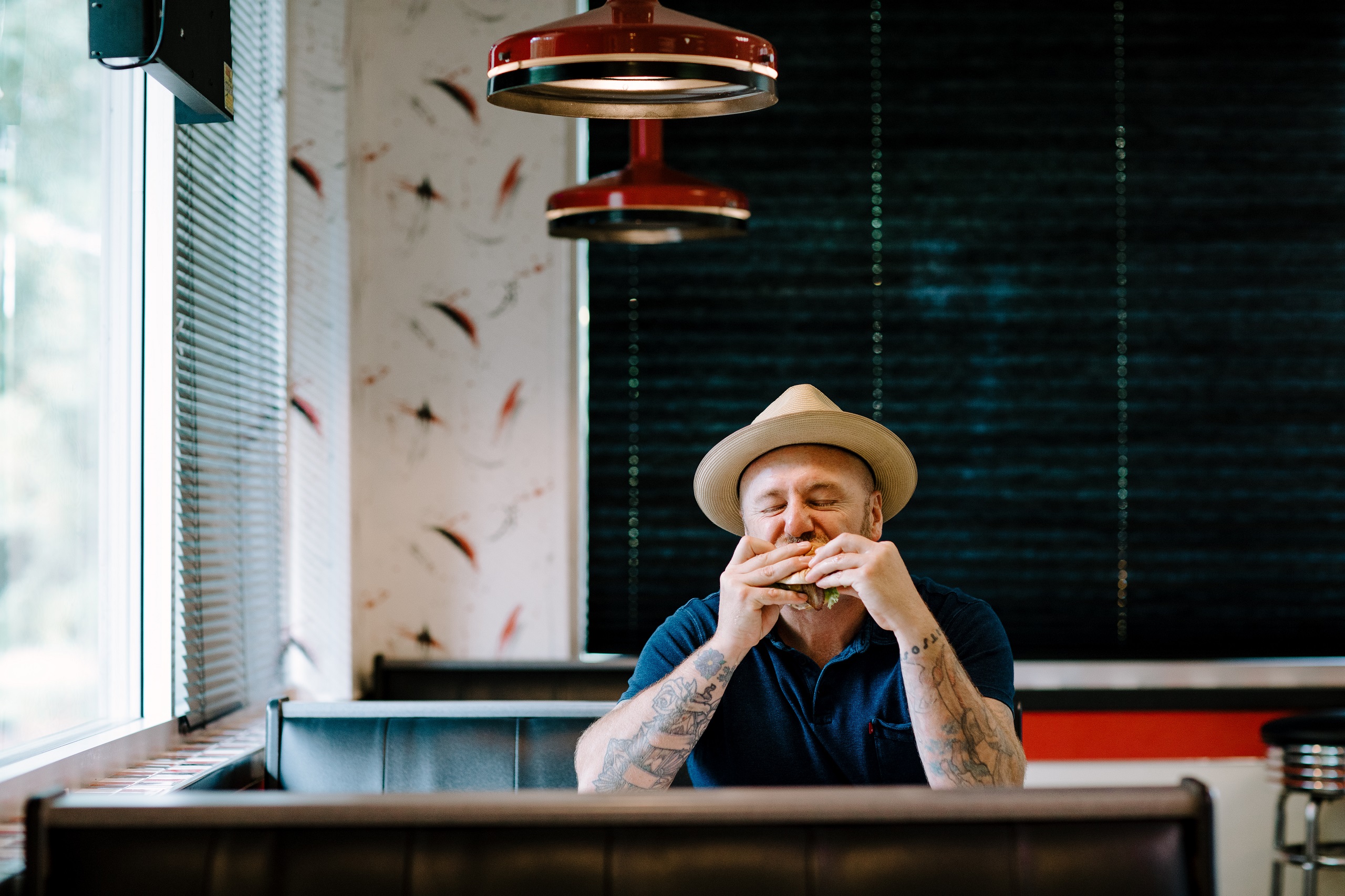 Elias Cairo didn’t mean to create a smoked meat empire in the Northwest. The founder , COO and Head Salumist of wildly popular Olympia Provisions, Eli had planned to live out his days in the Swiss Alps where he’d been learning to process wild game and cure meat. The child of first-generation Greek Americans, Eli grew up in Utah raising animals and vegetables and working in his family’s Greek restaurants.

When Eli said he wanted to become a chef, his parents convinced him to skip the fancy culinary schools and head overseas where he worked for a Swiss hotel that also operated as a wild game processor. “If you shot an animal in our valley, you’d bring it here.” says Eli. “We would process all these amazing wild animals. I can remember on the first week in this place, I opened up the walk-in door and there was this gigantic Ibex with huge horns on it.” A hunter himself, Eli fell in love with butchery and making charcuterie.

A visit to Portland ‘s Farmer’s Market with his sister (and OP CEO) Michelle upended Eli’s Swiss Alps plan. “I was walking around trying all the produce and all the cheese and wine and beer. And I was like, where’s the salami? My sister simply said, ‘I don’t think anybody makes salami.’ I was blown away. I’ve just spent five years of my life learning how to make this weird, molded meat with a really, really delicious high-fat content. So I decided to move here.”

Once Eli settled in and discovered Burgerville, he became a fan. “The first time I ever came to Burgerville, you just knew it was a different experience,” says Eli. “You go into Burgerville for the first time and you can see Hood strawberries. You’re seeing Walla Walla onion rings and all of these amazing local producers that have positive impact on the region. I’ve dreamt of working with Burgerville ever since then. Because I knew they cared, and they chose great quality products to work with.”

Over the next several years, Eli started building a network of suppliers for ethically sourced, GAP-certified pasture-raised bacon, slowly growing the supply from regional farmers.

So, what IS perfect bacon for Burgerville? According to Eli, bacon should be an ingredient rather than the star of the show. “The whole goal is to make a perfect bacon that isn’t overwhelming the burger. It should just be the crunchy, smoky porky part of the burger. It shouldn’t be covered in like chili flakes or too smoky or too sweet. It’s just gotta be the perfect bacon. And that is for me, bacon, salt, little bit of sweetness, beautiful smoke, not too overwhelming and crunchy goodness.”

Achieving bacon Nirvana is what Olympia Provisions strives for. “Bacon is kind of like the best metaphor for what’s wrong with the meat industry in America. The vast majority of bacon that you’re eating in the world has never been in a smokehouse, which is unbelievable. They make this crappy brine that has liquid smoke, sugar, salt water in it. They inject it into it to make it taste like it’s been in a smokehouse and they run it through a conveyor belt oven to bring the temperature up to render it. “

Olympia Provisions couldn’t be more different. “I do it the way the bacon was made when we started preserving bacon hundreds of years ago.  I do salt, a little bit of sugar, a little bit of cure, keep it in salt for 10 days. We hang it. We smoke it for 10 hours over (a mix of) apple wood, hickory and other European hardwoods.  We smoke it for six hours so the smoke gets all into every single bite. There’s no liquid smoke. There’s no injecting it with fake ingredient. It is all real.”

Real ingredients. Locally sourced when possible. That’s what Burgerville – and Olympia Provisions – are all about.